The growing influence of sustainable and responsible investing continues to cultivate a more just and equitable economy. Its efforts have fostered progressive changes in corporate behavior, helping to improve executive pay practices, increase board diversity and transparency on political contributions, enhance labor and human rights conditions, and address climate change accountability, among other noteworthy initiatives.

An investment strategy that incorporates analysis of both financial returns and societal impact is particularly appealing to individuals and organizations unwilling to sacrifice investment performance as they promote socially and environmentally responsible companies. While many proponents of values-based investing have largely confined their investments to the negative process of excluding certain controversial industries (i.e., tobacco, alcohol, defense, etc.) which then may result in insufficiently diversified portfolios, others have turned to positive screening strategies to promote their values.

Marc J. Lane, author of Profitable Socially Responsible Investing?: An Institutional Investor’s Guide (published by Institutional Investor in 2005), strongly believes, based on his empirical research, that principle-focused investors can carefully use positive screening techniques to build portfolios comprised only of securities issued by companies whose behaviors are highly consistent with the investors’ core values and beliefs—without sacrificing either diversification or performance. In doing so, socially responsible investors can become agents of positive social change.

Thanks to the growing demand of values-based investors, the socially responsible segment of the U.S. investment pool has become very significant. 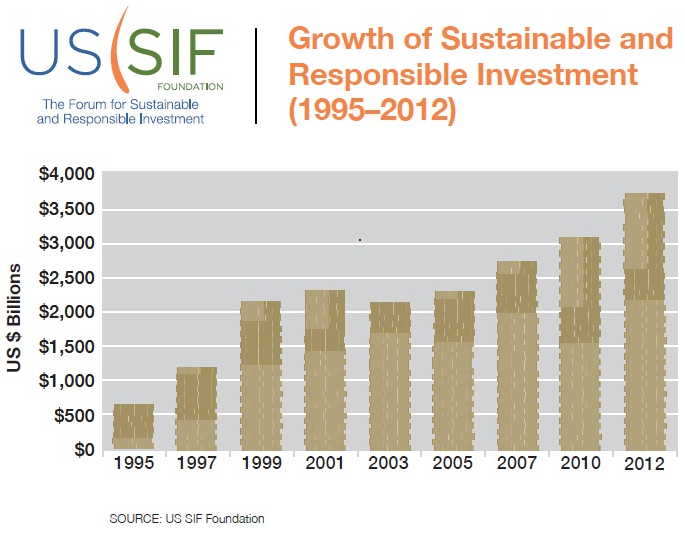 As reported in the 2012 Report on Sustainable and Responsible Investing Trends in the United States, “one out of every nine dollars under professional management in the United States is invested according to SRI strategies.” The same report also found that, from 1995 to 2012, assets under management using social responsible and environmental strategies increased by 486% while the broader universe of professionally managed assets grew by 376%, representing $3.74 trillion (more than 11%) of the $33.3 trillion total assets under management.

The increasing prominence and influence of values-based investing has prompted companies to take social and environmental initiatives more seriously, cultivating a collaborative and proactive dialogue between a company’s management, its shareholders, government officials, and the community.

Shareholder advocates have employed resolutions to promote environmental, social, and governance issues. Although not all resolutions gain shareholder approval, they inevitably bring important issues to the attention of company management, often winning media attention and educating the public. As a result, such resolutions have become an essential catalyst to promote awareness and ultimately lead to improvements in managerial decisions. Through persistent constructive engagement, shareholder activists have witnessed corporations increasingly embrace good environmental, social, and governance practices and disclosures and incorporate these standards into their operations.

According to a survey conducted by the Forum for Sustainable and Responsible Investment, 24% or more of environmental, social, and governance resolutions received more than 30% of shareholder support in the last proxy results, up significantly from 2007 to 2009, when only 15% to 18% of environmental and social issues resolutions won such support levels. Such efforts have resulted in an increasingly greater percentage of companies adopting advisory votes on issues such as the following:

The trend going forward favors shareholder advocates and their increasing sway on company policies and practices, helping to promote continued constrictive dialogue between shareholders and company management. Among the initiatives to anticipate in 2014, particular emphasis is being placed on increasing opportunities for qualified women to become board members. Having more women on company boards has been linked to better company performance by numerous academic studies. Most recently, an October 2013 study by Professors Maurice Levi, Kai Li and Feng Zhang demonstrates that “firms with female directors are less likely to make acquisitions and if they do [make acquisitions, they] pay lower bid premia.” Board accountability and executive compensation remain a continuing theme, as efforts will be made to hold individual directors accountable through the use of targeted “vote no” campaigns. Moreover, ongoing efforts are being made to encourage greater adoption of comprehensible and verifiable human rights policies and systems while promoting enhanced corporate governance structures and proxy access.

Marc J. Lane Investment Management, Inc., was an early proponent of values-based investing. Every client’s values are different; so, principled investing must encompass a tailored approach, rather than the monolithic "one size fits all" strategy necessarily adopted by mutual funds and, for convenience, by many other investors and investment advisors.

To provide personalized service, Marc Lane developed his proprietary approach to principle-focused investing, the Advocacy Investing® strategy. Advocacy Investing® employs a positive “best in class” portfolio screening strategy that, after first identifying companies with sound business fundamentals and solid corporate governance, screens those companies whose corporate behavior reflects and promotes the investor’s personal beliefs and values or, in the case of an institution, its mission. In doing so, we provide and manage customized portfolios that positively reflect the client’s values in a fully diversified portfolio. In short, the Advocacy Investing® approach meaningfully speaks to one's own values. It is practical, it drives change, and it turns passive assets into active assets.

Peterborough's problem was daunting: Sixty percent of prisoners serving short-term sentences historically had gone on to re-offend within a year after their release. But policymakers were confident that a solution was within their reach. They attracted private investment to pay experienced social service agencies to provide intensive, multidisciplinary support to short-term prisoners, preparing them to re-enter society and succeed outside the penal system. - See more at: http://www.chicagobusiness.com/article/20131007/OPINION/131009850/a-new-kind-of-futures-contract-for-illinois#sthash.ThgxeiFt.dpuf

The world's first social impact bond, or SIB, was introduced in 2010 to fund innovative social programs that realistically might reduce recidivism by ex-offenders in Peterborough, England, and, with it, the public costs of housing and feeding repeat offenders. Prudently building on the strengths of that initiative, Illinois Gov. Pat Quinn is rolling out SIBs to help solve some of the state's most vexing social problems.

A SIB isn't a traditional bond where investors are guaranteed a fixed return but a contract among a government agency that agrees to pay for improved social outcomes, a private financing intermediary and private investors. SIBs shift the risk of experimenting with promising but untested intervention strategies from government to private capital markets, with public funds expended only after targeted social benefits have been achieved.

Peterborough's problem was daunting: Sixty percent of prisoners serving short-term sentences historically had gone on to re-offend within a year after their release. But policymakers were confident that a solution was within their reach. They attracted private investment to pay experienced social service agencies to provide intensive, multidisciplinary support to short-term prisoners, preparing them to re-enter society and succeed outside the penal system.

The government decided which goals would be supported, but exactly how those goals would be achieved was left to the private sector. It was the investors, through a bond-issuing organization, who ultimately endorsed the allocation of investment proceeds — how much would be invested in job training, drug rehabilitation and other interventions.

Illinois' SIB effort was spearheaded by the state's Task Force on Social Innovation, Entrepreneurship and Enterprise — the governor's think tank on social issues, which I am privileged to chair — with support from Harvard University's John F. Kennedy School of Government, the Rockefeller Foundation and the Aurora-based Dunham Fund. A request for information issued by the Office of Management and Budget on May 13 yielded responses from service providers eager not only to reduce recidivism here but also to create jobs, revitalize communities, improve public health outcomes, curb youth violence, cut high school dropout rates and alleviate poverty.

Now the governor has issued a request for proposals intended to spur better outcomes for Illinois' most at-risk youth — by increasing placement stability and reducing re-arrests for youth in the state's Department of Children and Family Services, and by improving educational achievement and living-wage employment opportunities justice-involved youth most likely to re-offend upon returning to their communities.

Kudos to Mr. Quinn for bringing SIBs to Illinois. May they soon start delivering on their promise.

- See more at: http://www.chicagobusiness.com/article/20131007/OPINION/131009850/a-new-kind-of-futures-contract-for-illinois#sthash.ThgxeiFt.dpuf
The world's first social impact bond, or SIB, was introduced in 2010 to fund innovative social programs that realistically might reduce recidivism by ex-offenders in Peterborough, England, and, with it, the public costs of housing and feeding repeat offenders. Prudently building on the strengths of that initiative, Illinois Gov. Pat Quinn is rolling out SIBs to help solve some of the state's most vexing social problems. - See more at: http://www.chicagobusiness.com/article/20131007/OPINION/131009850/a-new-kind-of-futures-contract-for-illinois#sthash.ThgxeiFt.dpuf


Send this page to a friend
Send This Page